These are just two quickies, much shorther than my usual tutorials cause the icons had very few layers.

tiptoetwirl requested a tutorial for these two so here they are :> Yes, the rest of my Ask the Maker tuts are still on the way, I just wanted to make these first kind of as an easy way to get me to write them again.

(from homeofthenutty.com), pasted it on a 100x100px canvas and resized and moved it so that the focus would be on Harry and the hand. I then ran auto contrast (ctrl + shift + alt + L) on it - I do this with almost all my icons as a first step to get a bit better contrasted base, but in this case it didn't make much of a difference. Result:

Step 2: I was a bit bothered by the huge crowd in the frame, like I usually am, for some reason. I wanted to make Harry the single character, so I blurred the other characters out. I can't remember exactly what techniques I used, but I'm fairly certain it was a combination of multiple tools and steps, and may have involved most of the following:
- smudge tool, works for broad strokes, smooths the icon heavily, but may result in messiness
- clone stamp tool, to make small areas clones of some smoother area
- patch tool, makes the selected area automatically fit the other selected area. I'm pretty sure I used this one because the background looks like it has that grid-looking pattern from the right repeated on the left.
- and usually as a final step the regular blur tool to smooth out any visible transitions from smooth to non-smooth. 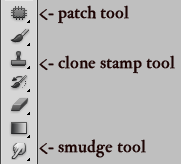 I really recommend playing around with all these tools, they're all really useful for different situations and often work best when used together.

I didn't worry too much if it didn't come out all perfect, because I already had a plan to pretty much cover the background in textures. All I needed was something smooth enough not to shine through in distracting ways.

Step 3: Ok, it's horribly dark. I fixed that by making a Curves layer (any adjustment layer will do though!) and just set it on Screen 100% without making any actual points to the Curves. This has the same effect as a copymerge layer on Screen, but I've recently started using this method instead because if you want to change the crop and move the background you'll have to do the copymerge screen step again. But not with an adjustment layer because it covers the whole canvas area.

Step 4: The brightness is better, but it's still undercontrasted and blurry. So I make a gradient map layer with the Copper gradient (totally got this idea from

fuuurs ) - it's this one, should be in the standard gradients that come with PS. Anyway flip the gradient and put it on Soft Light 73%. I often use this gradient because it gives a really sharp, crisp, defined look, really increasing the contrast. It's the two middle points that make it really so sometimes I remove the two end points, sometimes not (the result is a bit different). Sometimes I also change the hue of the points, but not often the brightness, because it's the stark brightness difference that makes the gradient so effective. In this case however I seem to have kept the gradient just as it was.

Step 5: This is where I go crazy with textures! I still needed to cover that sloppy-looking background, especially the left side, and I also knew I wanted a really really textured look, so I went browsing my texture folder for candidates and decided on this gorgeous texture by

Paste it on the icon and set it on Hard Light 100%. Why Hard light? Idk, I usually use Screen or soft light for this type of situtation but here I noticed that screen would eat away all the contrast I just made, and soft light wouldn't give me that textured look I was looking for. Hard light is tricky and usually doesn't work, but in some cases it's definitely worth a try cause it can give you really interesting results too.

Step 6: This would have been fine like this already imo, but for some mysterious reason (spoiler: IT'S BECAUSE I CAN NEVER STOP FIDDLING IDK) I decided to still experiment around. I'm pretty sure there were tons of dead ends between these steps that I later deleted, that's just the nature of experimenting, but this is what I kept:

Copy the layer with the smudged background (result of step 4), drag it on top, desaturate it (ctrl + shift + U) and put it on Soft Light 100%. I did this to increase the contrast because I already had this evil plan to put even more texture into it and knew I needed some extra contrast. However this also made it a bit too dark for my liking, so I made a Brightness/Contrast adjustment layer, made a clipping mask so that the layer would only affect the desaturated layer we just made (either select the two layers, click on the right button of your mouse and select 'create clipping mask', or just bring the cursor in between the layers, press the alt key and click with the left button of the mouse), and then upped the brightness to +49.

erzsebet. I chose it because the color and whole look seemed to fit the other texture I used (this is why i often like to mix multiple textures from the same texture pack in one icon! They often support each other nicely.)

I rotated the texture 90 degrees counterclockwise, and then flipped it vertically. All this rotating because it kinda looked like there was this curtain of weird light on the left, and I wanted to increase that effect. I like to decide on a fixed light source in an icon so that my textures use and lighting wouldn't be all over the place (...they still might be, but at least not for this reason :D). Anyway put the texture on Screen 100%.

Step 8: The last texture! I just wanted to add some really subtle colorful blobs, especially to the sides, so I chose this one

erzsebet) and rotated it counterclockwise. Put it on Lighten 50%. This makes the shadows a bit lighter and gives it a more defined magenta/blue coloring.

Step 9: Almost there! Now comes a really really random-looking step, but it had its purpose! I wanted a bit more contrast since the last step washed it out a bit, so I made a copymerge layer (ctrl + alt + shift + E), ran autolevels on it (ctrl + shift + L), desaturated it (ctrl + shift + U) and went to Edit -> Fade desaturate, and inserted the value 50%. The I dragged the layer underneath the two topmost texture layers and put it on Soft Light, opacity 65%, Fill 86% (JUST TO COMPLETE THE RANDOMNESS K? I literally have no idea why these numbers o_O). Anyway the logic behind this step is that often when you make a soft light copymerge layer, it will intensify the coloring too much, so I often desaturate the soft light layer. If I'm going for a muted coloring, i leave it 100% desaturated, but if I just want to avoid eye soring saturation but still want it vibrant or deep, I fade the desaturation a bit, usually 50%. 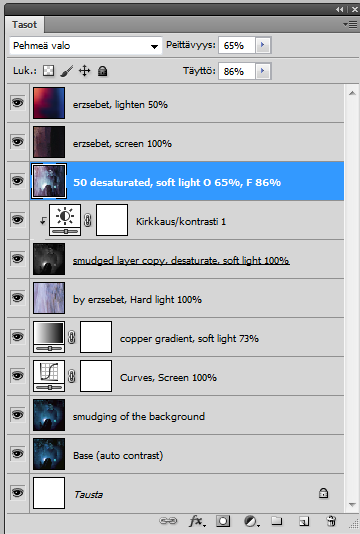 (Note: I didn't sharpen this icon at all - this many soft light layers and especially the copper gradient usually make it really sharp so further sharpening wouldn't be any good. In fact this is bordering on too much sharpness and probably a lot of people think it already crossed that line. How much sharpness I like completely depends on my mood so when making this I saw how sharp it was and was like 'yay, good'. Now I'm a bit more like 'i could have blurred it a bit'. So if you think it's too sharp like that, a few things to try would be to make the opacity of the copper gradient smaller, to blur one or more of the soft light layers or leave some out if you dont mind the contrast loss, and if none of this helps then make a copymerge layer and carefully blur the most distractingly jagged lines with a really small opacity blur or smudge tool.) 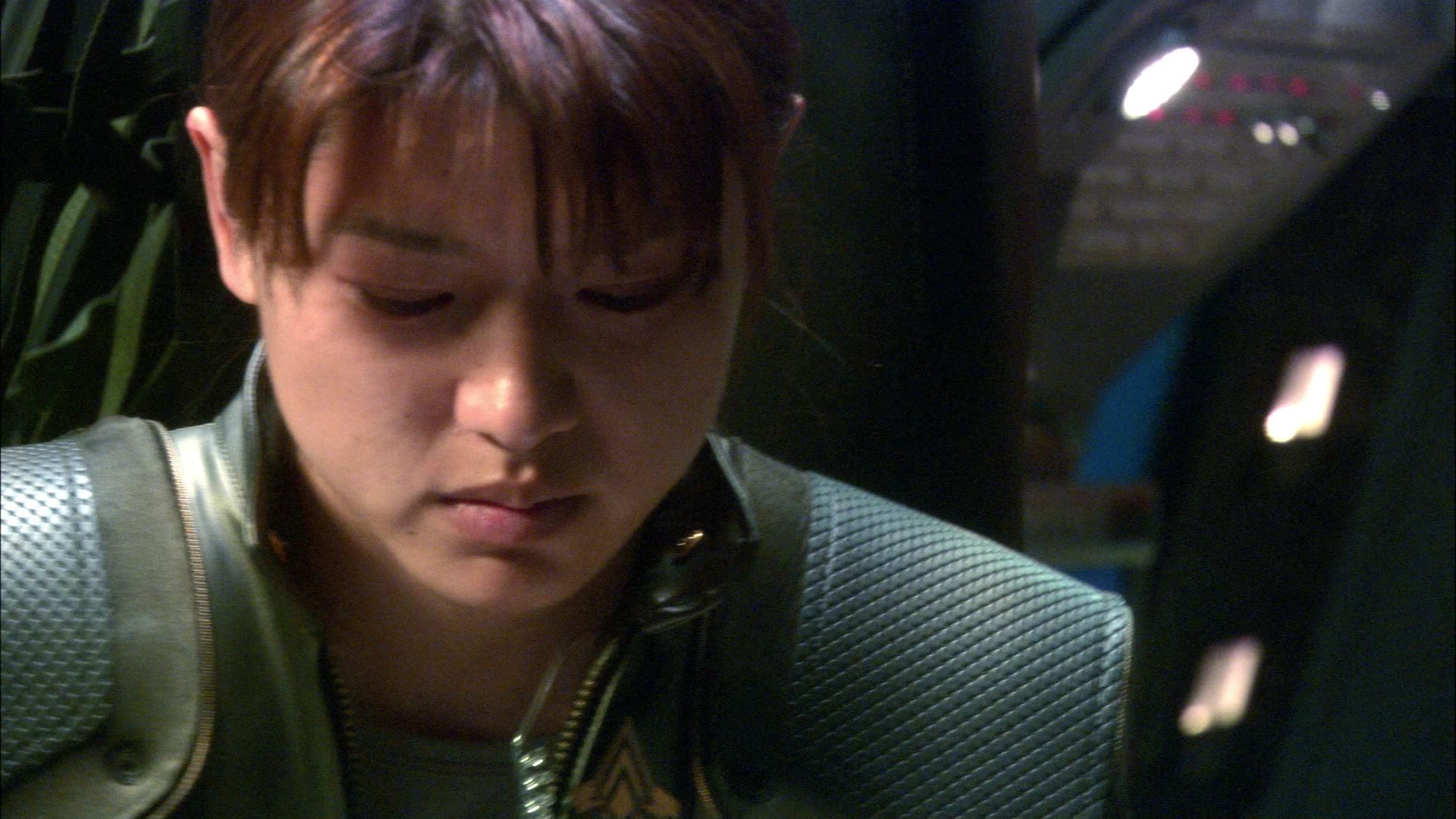 Step 1: Paste the cap on a 100x100 canvas, resize and crop - I knew this had to be a close crop icon because I love her expression and the shadows on her face. I usually try to avoid cropping in a way that cuts the eye, but here I knew I'd make the shadows so dark that the right eye wouldn't be visible anyway.

Step 2: Copper Gradient map, as described in the Harry tut above. Reversed and put on soft light 100%. I used this because the icon looked sooo blurry and I wanted more contrast and a warmer coloring. (omg I swear I don't use this gradient map on every single icon :O but sometimes I do use a trick or two the whole day/week/month if it seems to work).

Step 3: I wanted a more prominent lighting now, cause that thing is looking horribly matte. Sometimes that can be a desired effect, but in close crops I often want a glowier look with a bit more dramatic lighting. So make a gradient from #320f2a to #ebe6ce, use the angle 146.31, and put the gradient layer on soft light 100%. (or, if you're lazy, just copypaste this). This gradient is on my saved ones but I'm pretty sure it's not a standard gradient and I've probably saved it myself from someone else's tutorials (

naginis ?). I loved the color combination anyway, just can't take credit for it :>

Step 5: The previous step increases the saturation, which I didn't want since I want this to be a more muted coloring. Sometimes in these cases I use the trick from the Harry tut - desaturate it a bit - but now I wanted not only lesser saturation but also to change the hue from reds more towards golden tones. So I make a new gradient map layer and pick this gradient: 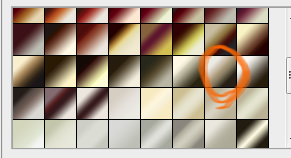 It's by elvensword at DA, and the whole set can be found here. This has been my favorite gradient set forever, seriously these are super useful :>

Then I flip the gradient and create a clipping mask (see the above tut for how) for the gradient map layer and the blurred soft light layer so the effect is the same as if the blurred layer was in this vintage coloring. The result is only slightly different from what it was before but I vastly prefer it!

Step 6: Last step - sharpening! Unlike the Harry icon, this one definitely needs sharpening because I cropped so close that it was left really blurry. I don't remember which method I used, but I tried to recreate the effect with a few of my usual methods, and filter->sharpen->sharpen, edit->fade sharpen: 40% looks really similar so it's probably what I did. 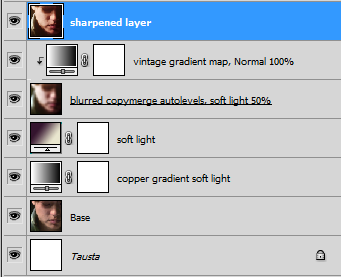 (Note: if the result looks a bit brighter/better contrasted than the previous step, that's partly because of the sharpening but mostly because for some reason imgur fades the images a bit. The result icon however is hosted at Photobucket and it doesn't do nearly as much fading. Idek what that's about but if someone knows plz enlighten me o.O these were my steps anyway, I swear!).


Please ask if something was unclear. There were a couple of parts that weren't easy to explain so I'm not at all surprised if you have questions. Hopefully this was of some use to someone too :)
Tags: !maker: jsfunction, type: tutorial
Subscribe